Identity Conference was hosted in Abu Dhabi - United Arab Emirates (UAE) - with the institutional support of EIDA, the Emirates Identity Authority on March 9 and 10, 2010.

This annual Gemalto conference has established itself as a major venue in the agendas of Executives involved with Secure Identity and eGovernment Services, allowing them to keep up-to-date on the latest key developments and governments’ projects.

According to Eric Billiaert (Gemalto´s Marketing Communications Manager) “Gemalto is proud to be the ongoing organizer of this important conference, as it has done for past years”. The Identity Conference is an excellent forum for government authorities to discuss, share experiences and exchange views in a dedicated environment.

This year a high profile keynotes team from around the world got together in Abu Dhabi on March 9 and 10. Contributing to the opening keynote session, His Excellency Dr. Ali al-Khouri, Acting Director General of the Emirates Identity Authority will highlight the successful citizen and government ID projects being undertaken in the UAE.

The speakers among whom this year, Tarvi Martens from Estonia, the man who made e-Voting possible for the first time in history, Didier Trutt, CEO of French National Printer (IN), Jacques BUS, Head of Unit, Trust & Security DG Information Society and Media from the European Commission, Gerson Rolim (me), camara-e.net´s Executive Director and Digital Mercosul Coordinator, prominent speakers from the Emirates, Gulf countries, and Europe were also keys that shared diversity and visions. 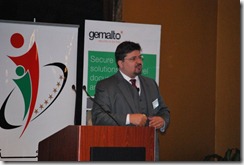 My presentation in Identity Conference 2010 can be found below. This presentation discussed about the importance of the eID for the evolution of eGovernment and Digital Economy Cross-Border in Mercosul, positioning the eID as a fundamental tool to support the eGovenance in eBusiness.

As showed in the presentation, in our view, the Digital Economy is composed by the following formula:

As long as we have the Digital Economy completely established, we can build the DIGITAL CITIZENSHIP based on the eID.