Digital entertainment popularity is growing strongly worldwide, and it has been so far purchased in many ways and different medias (CDs, DVDs, Blu-Ray, iPod, Digital TV and via Internet – streaming and download, Internet Radio, Mobile Radio, iTunes and Video on Demand - VoD). The demand for the various media businesses adjust to life in a digital world is even bigger; this decision is crucial and directly impacts in the entertainment sector longevity.

The music industry, for example, toke a long time to understand the e-world and adjust itself to the Internet and e-commerce. Because of this long resistance to evolve music record companies have paid a high price, opening space to the evolution of a so called “non official” digital songs download culture. As a direct result, music sector shrunk 70% from its size ten years ago.

However the situation became to get better in January 2001, when Apple launched its money machine equation based on “iPod + iTunes”, creating a new multi-billionaire digital songs business.

Paradoxically, the music industry spent a long time enforcing copy protection solutions to online music sales, even though higher-quality CD versions of that same music were generally shipped without any form of copy protection. Acting like this, music record companies penalized e-consumers, that had limited access to their DRM songs version, when “non official” songs users were 100% free to use the same digital content.

So at first, every digital music bought from iTunes Music Store was protected by FairPlay, Apple's DRM solution.

However, the music industry finally realized that if they give a chance, e-consumers will pay a reasonable price for unprotected, high-quality music that they can use as they wish. The e-consumers want no more to manage the authorizations for music playback amongst the various devices and medias they use. They want to burn anything they want, and back up their songs without having to re-rip them.

The DRM´s evil empire started to shake in June 2007, when Apple and EMI announced iTunes Plus, a DRM-free music at higher bit rates service offering songs for $1.29, versus the 99 cents per song for the FairPlay-protected versions.

Then, in September 2007, Amazon took another step towards e-consumers´ freedom, launching its own MP3 download service, because, unlike iTunes Store at that time, music in the Amazon MP3 store was (and remains) completely free of DRM.

So, as it was expected to be, the “grand finale” came again from Apple, that announced during 2009 Macworld Expo that iTunes Store was going DRM free, at the expense of Apple's "one-price-fits-all" strategy. Over the next few months, the entire 10 million iTunes Store music catalog will migrate to DRM-free versions at higher bit rates.

Undoubtedly e-consumers are now really satisfied for many reasons. First of all, once they are finally free to listen to their digital songs in any format, media and devices they want,
without worrying about rights or permissions issues or how many copies they have. Besides that fact, as every music consumer become justifiably outraged when damage their CD or DVD (media) and are forced to buy the title again, imagine what happens if they lose their entire digital music library (FairPlay-protected) if the iTunes Store ever vanishes. 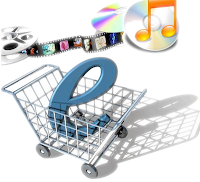 Therefore, after years of misunderstandings and loses in the e-commerce environment for both sides (e-consumer and music industry), the music record companies “discovered the obvious” that customer freedom must be respect as a pétrea clause in the Internet, especially in nowadays convergence scenario.

The decision to stop penalizing the e-consumer of paid digital content, leveling their experience to the one the pirate content users have, will surely help to increase online sales of official music and thereby increase the revenue from e-commerce.
Postado por Gerson Rolim às 08:06