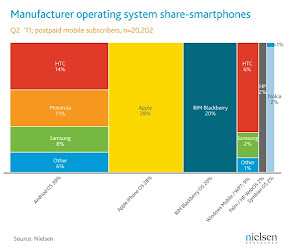 Compare those numbers with Nielsen's March results, when Android first began to edge ahead of RIM and Apple. That month, Android was at 29 percent, while RIM and Apple were in a dead heat at 27 percent.

Just as then, however, since Android is a platform that relies on several different OEMs to produce the hardware (HTC, Motorola, Samsung, LG among them), the fragmentation among the Android OEMs means that it's impossible for any one of those manufacturers to come up with numbers in the iPhone territory (let's not talk about Android OS fragmentation, all right?).