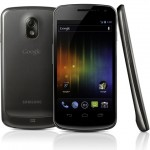 Even from the Samsung Galaxy Nexus lock screen, you get a sense that this Google-backed Android smartphone is going to be different from all those that came before it. The reason: You can unlock the screen by quite literally showing your face.

Facial recognition is one of the cool, if still slightly flawed technologies included as part of Android version 4.0, perhaps better known by its yummy moniker Ice Cream Sandwich. Fortunately, you can rely on PINs and other backup plans when your mug fails to unlock the screen, which in dim light and under other circumstances happens more often than you'd like.

The above ad focuses on the creative flexibility and technological power of the new Samsung smart phone, which will ship with Android 4.0 “Ice Cream Sandwich.”

And it really does look pretty cool. A front-facing camera for video chatting is a welcome addition. The panoramic shots are cool. I don’t think any single phone is going to be an iPhone killer, but with the improvements baked into the new Android OS, and the impressive new screens on this and other Samsung phones, you can see how the market could easily shift away from such enormous Apple dominance.