There are a number of Billion Dollar-Plus technology Initial Public Offerings (IPOs) currently in Wall Street's pipeline, including Pandora.
Is it a new Dot-Com Bubble? 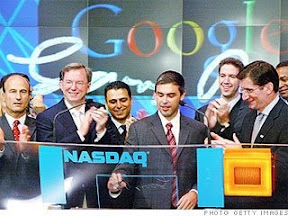 Pandora, the online radio company, may price at or above the top of its upward-revised range of $10 to $12 Tuesday after the bell when it makes an official decision.

But looming larger on the technology landscape, of course, are a handful of megadeals where bankers are jockeying for position.

Groupon started its IPO process this month and investors have spent a week scanning its every detail. So far, Groupon says officially that it wants to raise about $750 million, but in all likelihood that number will grow to something north of a billion dollars as the filing process and, ultimately, the roadshow, unfold.

The other major deals investors are waiting for are Zynga and Facebook. Zynga, based in San Francisco and famous for games like Farmville and Mafia Wars available on social-networking sites, may file for a US$1 billion-plus offering within the coming days or weeks.

Finally, Facebook, the social-networking site that is one of the most closely-watched private companies in the world, is increasingly expected to wind up being a US$100 billion plus deal, and is likely to go public by the first quarter of 2012.